Skip to content
Posted inblog
Posted by By Gopi Mattel February 15, 2021No Comments 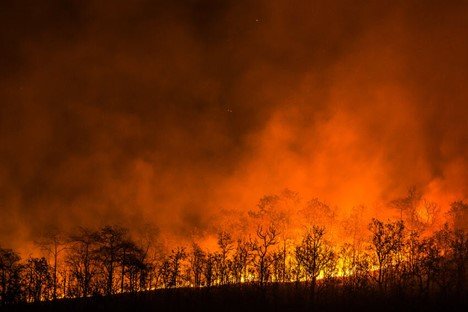 A 17,000 feet tall column of flame, rotating at the speed of 143 MPH, towered over Redding, California in 2018. With the power of an EF3 level Tornado, it was uprooting trees and sucking in material to burn. from every direction on the compass. As it grew higher, it was also spitting out burning firebrands in every direction and creating fast-expanding perimeter of fire. This in all its frightening fury, was a Firenado.

This was the Carr fire; but this was not the largest fire of 2018. There were other fires such as the Mendocino Complex fire which by itself destroyed 460,000 acres. These were a part of the record-setting fire damage year of 2018, which destroyed 1,600,000 Acres. But the record was completely shattered in 2020 in just a duration of four weeks – and that too in the non-fire season.

Native Americans managed the fires by setting periodic fires, which was actually larger in acres consumed than current years but was far less destructive. Regular fires burns up minor levels of fuel before it can accumulate too much. The Forest Service from its inception in 1905 did not follow that path. Instead they had a policy of fighting the fires as they happened. And CalFire which has a responsibility to fight the fires, had no ability to manage the fuel for the fires. But by the time they realized their error, forest-based businesses and people worried about air quality, had come to the idea that no fire is a good fire. The accumulation of surface fuels (without frequent fires to burn them off), and the settlement of wilderness areas have set the stage far greater damage from these fires

The next pandemic is breeding somewhere now.