Skip to content
Posted inblog
Posted by By Gopi Mattel June 21, 2021No Comments 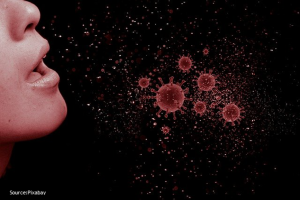 It is an annual event. Winter comes and if you have kids your household most likely has the sniffles. It is Flu season! Because kids bring home the flu from their school. It seems almost an annual tradition like Christmas. What we do not realize is that it is a grim and deadly event. On average, 50,000 people die in the USA alone, every year.

Flu is caused by the influenza virus which is a rapidly mutating virus with multiple variants every year. Vaccine pharma companies take an educated guess at the most dangerous variants and create a vaccine cocktail. People take the vaccines on a voluntary basis. This is only partially effective, especially if the companies miss their guess on the worst variants.

Unfortunately, a grave mistake was made six decades ago.

An engineer, William Firth Wells, studying particle behavior in air had assessed that a virus that is less than 100 microns in size would not fall to the ground but stay suspended in the air for hours. Anyone breathing that air would get infected. But one of the first scientists for the CDC, Alexander Langmuir, overrode those conclusions and spread the information that the limit is only 5 microns. He essentially said that most viruses would fall to the ground quickly and that viruses were NOT airborne diseases.

That implied that viruses would really be caught by contact or in the short amount of time when you were close enough to share the air of another breathing person. So social distancing and cleaning surfaces were the recommended methods to stop virus propagation. For the flu, vaccines have been the common answer. And the same recommendation was made for COVID-19 by the CDC and the WHO since they had decided COVID-19 was not airborne.

In reality, since the limit was actually 100 microns, the virus would stay airborne for hours and continue to infect everyone that came along and breathed that air.

Linsey Marr, an aerosol scientist at Virginia Tech, could not reconcile the recommendations with what she knew of small particle behavior. She tried to show to the authorities why their understanding was incorrect and that the COVID-19 virus WAS airborne. She was roundly ignored. With the help of two other scientists, Yuguo Li of the University of Hong Kong and Jose-Luis Jimenez of University of Colorado she was able to get support for her understanding of the 5-micron error. It wasn’t until they were able to work with infectious disease historians, Tom Ewing and graduate student Katie Randall of Virginia Tech, were they able to track the exact point at which the erroneous 5-micron limit became the accepted wisdom.

They faced down the authorities with all that evidence across multiple media venues. Slowly and reluctantly the CDC changed its guidance and announced that COVID-19 is an airborne disease. WHO is still working on accepting and communicating this change, to the world.

If the original CDC scientist had done his job correctly, then with that knowledge the recommendations for dealing with the flu virus would have been very different. We would have started treating indoor air a key vector of viral propagation. Vaccines would have been less important. Social pressure would have forced government to make air quality far more important.

Schools, churches and places where people gathered indoor would have made it a point to clear the air of harmful pathogens. And there have been multiple technologies available to treat it. Many technologies have been available: filtration, ionizing, plasma and ultraviolet rays are some of them. One technology in particular would have been of great benefit in killing the virus.

The flu virus kills between 350,000 and 600,000 people globally each year. Without treating air quality, the flu virus has probably killed hundreds of thousands of people over the last 60 years. Covid-19 probably has spread easier and killed far greater lives than it has to. Maybe hundreds of thousands, if not millions, of lives could have been saved if air quality has been treated as a priority.

Scientists try hard to solve problems of our society. They make errors, but the scientific system itself doesn’t stop trying to correct its errors. This is an important story of science breaking down the dogmas that may get created over time.

Lifeboat Ventures, is thinking about the problem air quality in its quest to mitigate disaster impact on society.

« Previous post
"Lifeboat Ventures announces 1st closing" Next post »
"Indoor air quality is the next LA Smog – a new front against COVID-19 and the Flu."

Indoor air quality is the next LA Smog – a new front against COVID-19 and the Flu.